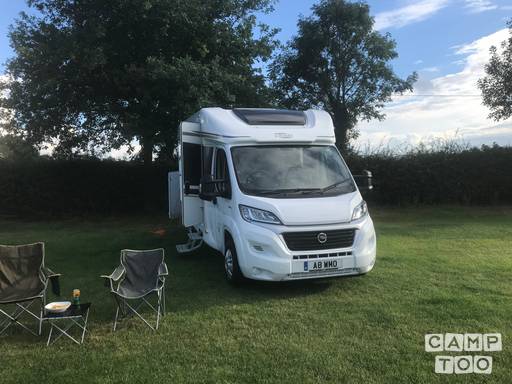 MoJo - our home on wheels !

"This is a very practical twin bed motorhome that offers a layout that’s strong in almost every area. Backed by German build quality and an impressive tally of kit, like the 167-litre fridge, cab air-con and cruise control, it feels more premium than budget. It’s not just good, it’s a class-leader." - Review of the Carado T337

Before departure you will need to sign the following documents: Inventory Vehicle Condition Fuel Level

Mark was very helpful and accommodating. He let us pick up the camper early as we were going quite a distance at no extra cost. This was very appreciated. The van was lovely, very comfy and well equipped, clean and little extra baskets to put everything in. I would definitely recommend this van.

Sadly,Iam not able to write a nice review as I feel obliged to write an honest one.The van in itself is comfortable and well equipped but- - no pressure/ hot water in the shower is big issue particularly as the owner then said that he was aware of it and was going to have it sorted on the next service ! No sound on the sat nav because wife doesn’t like it. No troubleshooting list when things such as alarm going off happens .ie how do you switch it off in the middle of the night .Advertised as 3 bed when really 2 + small child.The owner suggested we could use the storage compartment for a 3rd bed !No reduction in price for having to provide own bedding and towels. On return I reported a small scratch on the door which ,although I had no idea how it happened,I accepted liability.I also pointed out that the knob on one of the cupboard doors was faulty and became detached.We had put up with this all holiday. I had deposited £350 with Camptoo to cover damage.I accepted that I would be charged for the scratch but the owner had the audacity to charge me £130 for the door knob ! I then realised I was in a hopeless position as Camptoo couldn’t refund me until the owner had provided estimates for repairs which he had failed to do after more than 3 months.Apparently there is no time limitEventually,I settled for a £200 bill and got £150 back and I suspect the scratch will never be touched up and a B&Q solution will be found for the knob ! Sad really,as I paid more than average for Mojo because I wanted a relatively new vehicle and then was charged even more.It turned out a very expensive 2 week holiday.B&B next time ! Finally,why use Camptoo as they were of little help . B Minns

I hired MoJo for an epic MTB tour of Scotland- and she didn’t disappoint. Equipped with almost every convenience, and atmospheric lighting, evenings can be spent in what feels like a cosy mini hotel room (in my case watching the Euros group stage games). Driving her was easy and fun, provided the narrowest of lanes are avoided! Thanks to MoJo and to Mark’s careful preparations I’m now a motorhome convert.